Happy Easter Sunday everyone!~ And what better time to go eat some Easter egg-filled brunch while everyone else is painting Easter eggs? Hawthornes Cafe it is! A wonderful little German beer-cafe?! Wait, did I get that right? I thought cafes were for coffee, and not beer. I guess they do things a little differently in Germany.

Ms. Fewdie OD and Ms. Skylark each got an Eggs Benedict with Smoked Salmon & Asparagus, a spin-off on the classic brunch dish. The smoked salmon variation is personally my favorite take on these bennie eggs. Asparagus is a great pairing choice for the salmon because its crisp veggie flavor complements the smoked meatiness of lox. The beautiful color-complement of bright orange and green is an extra plus. Cheers for multi-sensory art!~ 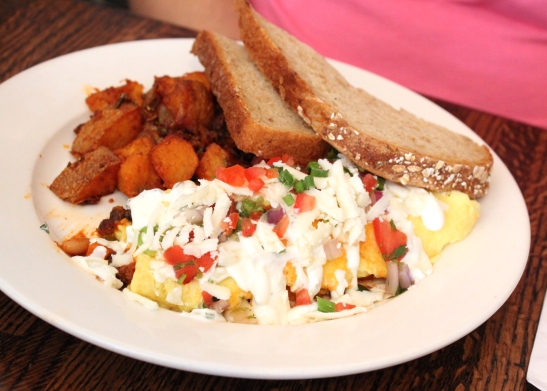 Being the original Ms. Gulnarnarnarnar, she got the day’s brunch special: Tex-Mex Omelette. I couldn’t really judge its deliciousness much based on the teeny bite I stole, but the bits of spiced ground beef had a sloppy-joe-like Tex-Mex effect. So at least it tastes as it sounds! Gulnarnarnarnar seemed satisfied. Plus, just look at the beautiful morning sunshine effect of all the little veggies.

Being the sweet-tooth, Ms. Bollywood decided on the other brunch special: Crunchy Peanut-Berry Pancakes. Fluffy with a bit of a crunch, I like the texture combination. We all liked the raspberry preserve that came with this – on point with the razz! 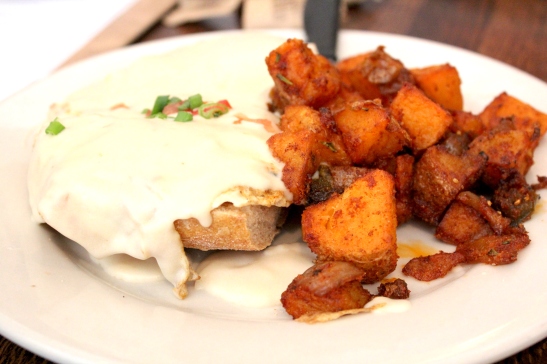 Daring to wiggle out of our comfort zone, Ms. Honeybadger and I each tried out the Welsh Rarebit. And wowwww, it tastes a lot better than it looks. I know it sort of just looks like a giant slab of cheese or mayo on crusty bread… but that is very misleading!! Rather, it’s topped with 2 over-easy, perfectly runny eggs, layered with rich aged fontina cheese fondue. Holy amazeballs!!!! Not only is fontina one of my most favorite cheeses (because it has a perfect balance of tartness, creaminess, and complex fermented flavor), but this fontina-based fondue is mixed with Imperial Stout-based beer sauce that adds an extra dimension to the cheese. Basically, fondue done right with eggs done right = Rarebit win!

I believe that this dish is of English-Welsh-Scottish origin, because each country has its own variation of this cheesey-alcoholic-eggy-concoction. These variations may use different alcoholic substances, mustard, or Worcestershire sauce. Count on northern Europeans to know their cheese and alcoholic substances! Another fun fact: the word “rarebit” is actually a corruption of the word “rabbit” (right in time for the Easter Bunny!) But rest assured, no actual bunnies were sacrificed in making this dish.

The homefries~ The brunch club was in agreement that these were some of the most awesome-sauce simple ‘taters ever. Savory, roasted little nubbins these were. Of course, you had some on the crunchier side, some on the mushier side, but for the most part they were just purely, deliciously and evenly seasoned potatoes. 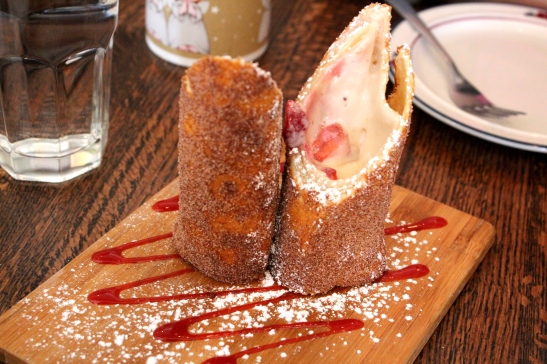 We split a double-dessert, first up Cheesecake Churros. Kind of a misnomer for churros because the dough wasn’t as thick and chewy as your standard churro, but cream cheese-strawberry filling is always fun. To be honest, I wasn’t really blown away by the dessert, but I always enjoy a sweet-ending to Sunday brunch. 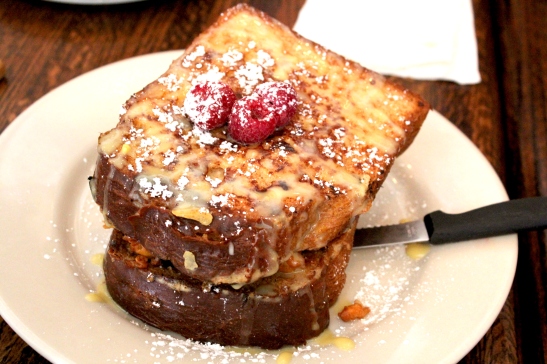 Similarly, the Funnel Cake French Toast looks way better than it actually tasted. This was your average-joe egg-smothered challah bread that was toasted. The one twist was the fried bits of funnel cake sandwiched betwixt the bread. I’m not sure how I feel about using fried dough as a filling for dough… To be honest, it was a bit of a “dough-verload” if you catch my drift.

While paying by the cash register, we noticed a nice selection of draft beers and bottles imported from various places. I personaly err on the side of caution with beer because I prefer my alcoholic beverages clear, but they might be fun try the unique selection. Hawthorne would be a nice revisit for a savory brunch, maybe even dinner & beer, but next time I think I’ll skip dessert.