Having never done Restaurant Week in NYC before (blasphemous, I know), I decided that this falsehood must be corrected by going to Aquavit. The restaurant specializes in Scandinavian cuisine, which perked my curiosity especially since Hiccup claimed that Viking food was inedible (How To Train Your Dragon). However, I was completely caught off-guard by the dress code, showing up in black shorts and converses… Since I couldn’t enter the dining room without proper attire, the waitress seated us in the bistro, which was actually brighter and lighter, but still relatively upscale.

Second surprise of the day was the Crayfish Festival offer including a platter of those mini-lobsters and access to their buffet. Now I had to think… Did I really want to eat a three-course meal from the limited RW menu, or pay $5 more for the cray-buffet? The fatty in me shrieked, definitely the latter!

So… RW fail, but a victory for value because we got to try a lot more dishes for nearly the same price! The crayfish were delish; it was a new experience for me who had never eaten this type of crustacean before. Their heads were huge, filled with rich yellow fatty globules, and caviar if lucky. The rest of the body contained juicy white meat that could be sucked out from the shell. This meat oozed of salty seawater and a tinge of spice, giving it a natural oceany flavor. 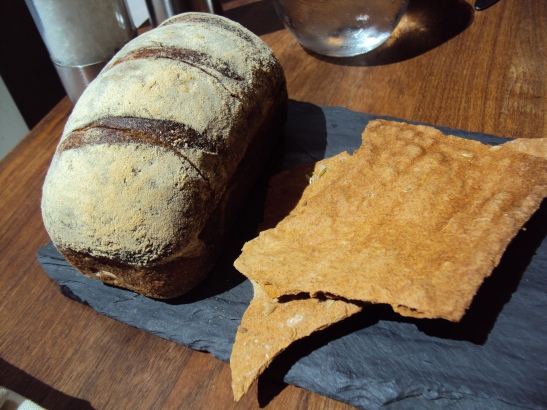 The complementary sourdough was just alright. Not too impressive or memorable, but the weird matzoh-like cracker was pretty good. It was crunchy, savory, and gave off the slightest scent of cardamom? Or was it anise?? Humble yet exquisite– I approve!

The rest of the buffet was just epic awesomeness. There were many cold dishes to choose from, so I enjoyed most of the poached, pickled, and smoked fishes. Some of the pickled vegetables were a bit too overwhelming for my tongue, but I would definitely recommend them for the pickle-lovers out there!

The most memorable plate was probably the Poached Salmon. Topped with a droplet of mild mayo, this little square of salmon packed a mouthful of flavor. A salty loxy taste sank into the tender salmon meat; the texture was rich, almost melting in my mouth. The mayo toned down the full flavor, so I preferred eating without. (I believe that a truly great dish need no condiments.) I also really enjoyed their Vasterbotten Cheese, which was creamy and generic enough to be enjoyed by the layperson, yet nutty and exquisite enough to be appreciated by the connoisseur. Pairing with the thinly sliced Smoked Ham gave me such a rush of joy that I couldn’t believe it was just ham & cheese. (If only school cafeterias could do their sandwiches like this!) Corn Pops said he the Skaagen Salad (made from crayfish bits and sauces) was great, but I honestly don’t remember much about that, except taking a few bites. I think I was too busy scarfing down the salmon!

The so-called Smoked Salmon was okay, but it didn’t taste very smoked. When I think of smoked salmon, I expect strong salty penetrating flavor– the kind that gives salmon this “other” taste that you can’t get from cooking or eating raw. This smoked salmon was rather mild, resembling sashimi more than lox. I still liked the soft texture and resemblance to sushi though. The Gentleman’s Delight was a funny name for egg salad. It was certainly a delightful egg salad, but I did not understand how it was gentlemanly… The Pickled Herring just tasted like pickles except with a tough fishy texture; we weren’t the biggest fans of those.

Of the hot dishes, the Swedish Meatball stole the spotlight, draped in its boa of lingonberries. The berry topping hydrated and sweetened the meat, bringing it to life. It kind of reminded me of eating a turkey burger with cranberry sauce, so I guess Swedish Thanksgiving? I loved the Sweet Corn soaked lightly in melted buttertoo. It was simple and delicious, comfort food. The Potatoes Gratin was a bit too creamy for me, but Corn Pops enjoyed the rich bechamel sauce.

Dessert was fun too~ Aquavit’s Strawberry Shortcake is average, but I loved some of their simplistic tiny cookies. The gingersnap was soft, chewy, and well-balanced (in terms of ginger and sugar). I also really liked the crumbly, buttery shortbread cookie, and their chocolatey brownie-cookie thing. Plus, the small size made them super-cute!

Although I completely failed my mission to participate in Restaurant Week yet again, I seemed to have fulfilled a greater duty to Scandinavian Seafood fare and meatballs. The Crayfish Festival is a pretty awesome experience, and I would encourage eaters to check it out while it’s still available. After all, RW comes twice a year, but crayfish season is ending soon! As for my mission, I guess I’ll just have to book again next week, hehe!