Yes, I know I just went to Kyoto-fu… but I couldn’t resist passing up my date with Unnie at Spot! After hearing people claim it’s the best dessert bar in the city, Unnie and I were dead set on checking it out. We did a thorough investigation on Spot’s desserts by sharing a Chef’s Omakase. (Hehe, just one after the other!) 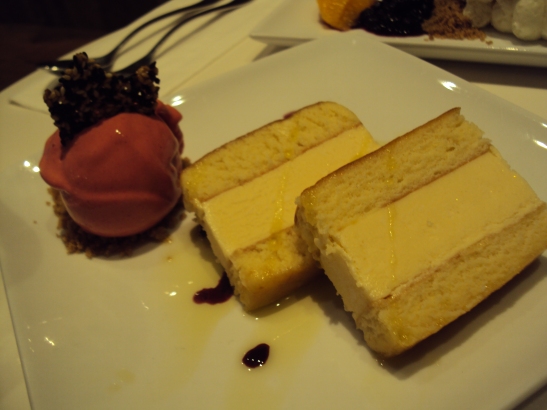 For the first course, we selected the White Miso Semifreddo, which consisted of a generous layer of frozen custard sandwiched between two slices of olive oil pound cake. The sweetness of the cake was balanced with a rich nutty flavor, and the cream center was just delightful. It was creamy and sweet, but mildly sour and rich, giving off a slightly cheesey taste. The raspberry sorbet was tart and froyo-ish, but not up to par with Kyoto-fu’s version. 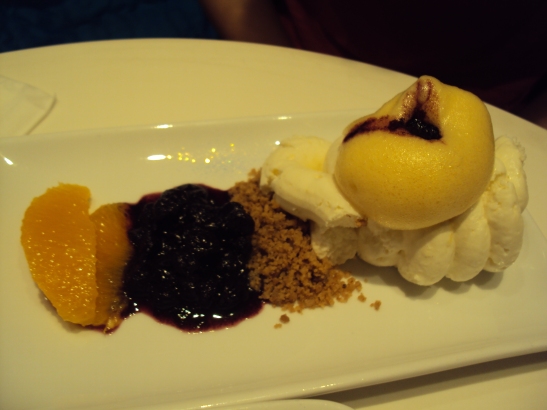 The Soft Cheesecake was Unnie’s favorite, but my least favorite. I mean, it was pretty good in the sense that the cake was very fluffy and airy like mousse, contrary to the traditional NY cream cheese-based cheesecake. However, it left a goaty aftertaste in my mouth, leaving me suspicious that Chef Ong used goat cheese as a base. The scent of mutton and goat cheese really sets me off.. but if you’re a fan of fancy goat cheese like the French, then I highly recommend this dessert.

The Lemongrass Pavlova was decent. I think my favorite part was the peach ice cream, since I’m a sucker for peaches! The pavlova was pretty interesting too– I had initially selected in thinking it was polvoron (absolutely delicious Spanish shortbread cookie), so it wasn’t what I had expected. Nonetheless, the pavlova was impressive: chewy with a meringue-marshmallowy consistency, and smartly flavored with a lemony yuzu anglaise. The fruity jello cubes were refreshing as well.

The Yuzu Alaska was pretty good, but its flavor was completely masked by the strong passion fruit foam. Unnie and I preferred to eat the alaska cake by itself in order to enjoy the fresh taste of yuzu citrus. We agreed that all the side ingredients: chocolate balls, passion fruit foam, and oreo crumbs were a bit unnecessary. The alaska shines by itself, but gets pushed off the center stage with all the excess side toppings. The same could have been said about the cheesecake, which was covered in some sort of fruity foam.

Unnie and I agreed that Chef Pichet Ong needs to work on flavor balance for some of his tapas. However, his chef special of the day made up for our disappointment in the other dishes. The Chocolate Panna Cotta was more bitter than sweet, but strangely enough, I liked it better this way; it tasted more sophisticated. The bitter darkness of the chocolate balanced out the light creaminess that typically accompanies panna cotta. The chocolate wafer balls also added a nice crunch to the smooth chocolate cream, a complement of textures. 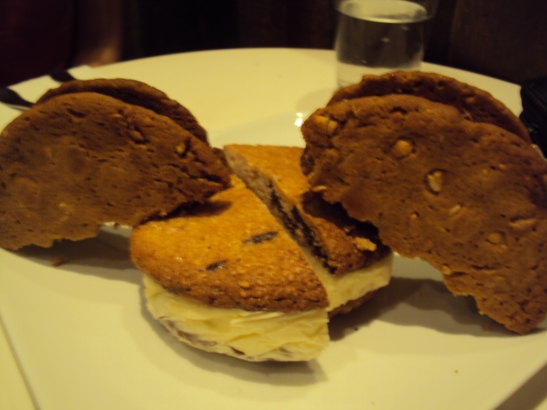 Finally came our ice cream sandwiches! The presentation was adorable, resembling Mickey Mouse ears or, two bunnies hopping on a stage. (Haha, so maybe I have an over-active imagination…) The peanut cookie chocolate ice cream sandwich was alright, but once again we found the peanut taste to be overwhelming. The chocolate ice cream was light and subtle, so it was easily overpowered by the cookie. (I literally had to scrape some off with my spoon to taste.) The cookie itself was great though, a good combination of sweet, salty, and nutty. The second ice cream sandwich was much better: chocolate chip with condensed milk ice cream. This time, it was the sweet ice cream that stole the show, but the chewy cookies harmonized nicely. By this time, we were so stuffed that we packed our cupcakes to go. 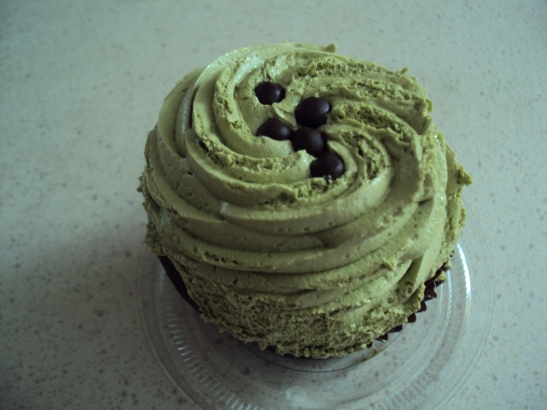 I ate my Chocolate Green Tea Fruit Jam Cupcake for breakfast the next day, and wowwwww was it amazing!!!! And by amazing I mean this may be my new favorite cupcake! I had expected the chocolate cake to be toned down in flavor but it was surprisingly dense, moist, and intensely chocolatey. The green tea frosting was whipped to a cloud-like status, with a consistency like Philly Cupcake’s frosting. The green tea flavor was rather delicate; I would have preferred more matcha, but too strong a flavor might have been weird on chocolate. But that’s not all! There was a pleasant surprise in the middle: fruit jam! Similar to the concept of the Brooklyn Blackout stuffed with chocolate pudding, Pinoch put a filling in the center of the cake. The jam wasn’t too fruity or sweet, carrying a unique flavor of raspberry tea. It blended in with the chocolate cake impressively– a multi-dimensional cupcake!