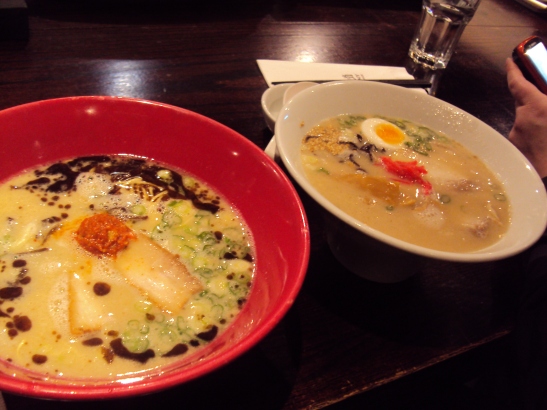 So my first day back on spring break and Chwissy-poo told me she wants ramen, so in reply I said, “CAN WE PUH-LEEEEEZZ GO TO IPPUDO??!!” I’ve been wanting to check that place out in forever, mostly because it tied with Hide-Chan for #1 ramen in NYC on Serious Eats. And honestly, I have not been particularly impressed with the other ramen joints in the city. (Sapporo, Naruto, Minca, Menkui-Tei, Momofuku were the ones I’ve tried.)

The wait was mad long… but luckily I had gotten there later than expected (stupid subway weekend lines!) and Chwis has already put in our reservation. But wowwww, did Ippudo live up to my expectations and more!! 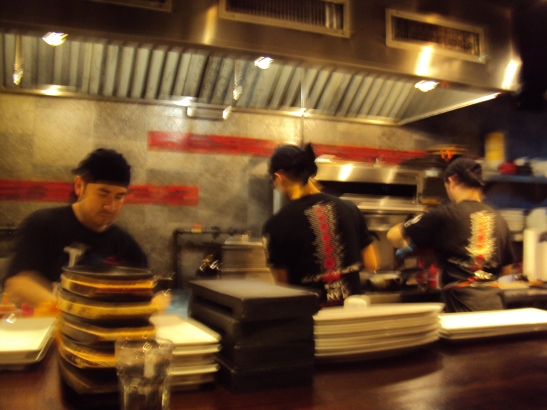 As our server led us to the noodle bar, she shouted out something in which all the servers greeted us warmly with an “Irashaiiiiimasee!~” in rowdy discord. It was like I opened the closet door to Narnia and wound up in an intimate little ramen joint in Japan.

To start off, we split an order of Hirata Pork Buns that were freaking amazing. A slab of succulent pork belly and crisp piece of lettuce sandwiched between fluffy spongey steamed bun. The meat was bathed in a light spicy sweet oil and drizzled with kewpie mayo, which resulted in a glorious deliciousness. Kewpie mayo added the subtlest hint of creaminess to balance the rich flavors in the spicily-seasoned meat.

Chwis ordered the Shiomaru Hakata Classic Ramen, with original pork bone-based tonkotsu broth, pork loin, kikurage mushroom, poached egg, and some other ramen goodies. I had a sip of the soup, which was relatively light with respect to the rich meaty flavor it packed. This is because tonkotsu is typically made by stewing pork bone and collagen for hours, so that all the fat gets broken down in the broth while still retaining the taste (a truly arduous task it seems!)

I decided on the Akamaru Modern Ramen, which is basically tonkotsu jazzed up with miso paste and garlic oil. I absolutely adore garlic, so I really enjoyed the extra zing of the added oil. I also had tender meaty slices of pork belly instead of loin and egg, which is perfectly fine with me since I prefer quality over quantity anyways. It also had some cabbage, kikkurage, and a soft hamburg steak-like meatball. 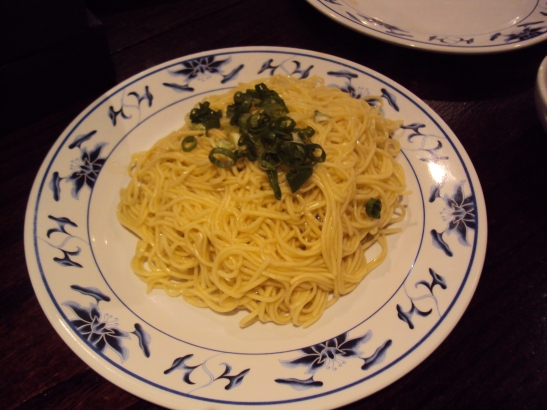 The noodles themselves were just as top-notch! They were super-thin but surprisingly firm at the same time, displaying great chewy elasticity. Chwis and I loved them so much that we each got a kae-dama (extra serving of noodles) when we realized we had soup left. I proudly exclaimed to my waiter using the scant Japanese phrases I knew, “Sumimasen, kae-dama onegaishimasu!” I got a big thumbs up and an extra pile of freshly cooked noodles in response!

Master of the Pork Buns!! (I had to point my camera at him stalkingly 5x to get a proper picture of him in action >.<)

Our waiter also totally fooled me into believing that the ramen dude we were sitting in front of was the master of pork buns in all of Japan. (I admit, I almost asked him for his autograph…) However, I did notice he had his way with meat frying and bun-assemblage… so you never know! Ippudo was completely awesome, not just for its delicious and authentic food, but also for its memorable experience! Although the wait is long, we agreed it was 100% worth it!