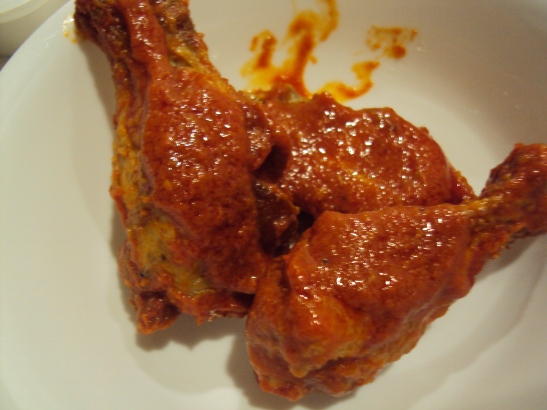 One of my favorite condiments in the world is buffalo sauce. I am so addicted to that hot thick mess of vinegary and literally spice-y flavor. My crazy suitey Steff (who I love to death) shares a similar intense passion for this taste, and we were coincidentally both hit with buffalo munchies the other day. So in honor of midterms, we went and ordered some wings from Evan’s Varsity Pizza, which supposedly has some of the best wings in University City.

And indeed they were some pretty delicious wings, although I prefer the drumsticks; something about eating chicken skin doesn’t appeal to me as much as meat. But anyways, Evan’s definitely sells some of the better wings I’ve tried in the neighborhood. (Steff really loved them too!) The buffalo sauce was the perfect thickness and spice factor (we got ’em hot!) It was sooo good that I heated up a man tou (Chinese steamed bun) just so I could soak up the sauce to eat. Sometimes I wish I had a jar of that stuff so I could eat it by the spoonful, haha.

The wings themselves were prepared well. I appreciated the generous amount of sauce slathered on. This keeps the meat moist and flavorful, unlike Ed’s (their close competitor), which I found rather dry. Final verdict: We are definitely ordering from Evan’s again the next time we get buffalo munchies!

Oh and speaking of wings, I would like to give a shout-out to the guys at Wing Quest who are doing a round-up of the best wings in Philly. Check them out at Wingquest2011.blogspot.com. Good luck WQ! I hope to be hearing some recs from you for future buffalo nights!