Adorned with bright green on the corner of 10th and Race, Sakura always seemed like a mystery to me. The name implies Japanese food, but the location is definitely Chinatown. Someone told me it specializes in Taiwanese food, yet they serve… soup dumplings? (For those who weren’t sure, these are clearly a Shanghainese dish and my friend Lili would admonish you if you mistakened it for anything else!) 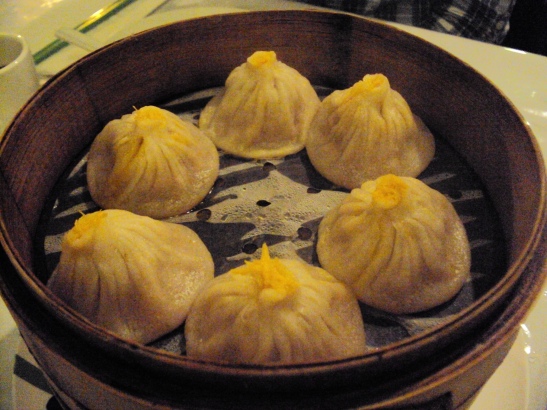 We got the pork with crabmeat soup dumplings, obviously a better choice than just plain pork. Sakura did deliver; they were decent and filling. Of course, nothing beats the succulent little piggies from Joe’s Shanghai, but at least they didn’t mess up in any way. Thin dumpling skin, no soup leaks, tasted alright.

I sampled a bit of K-Mart’s Sakura dumplings, which consist mostly of slippery rice skin and meat dipped in a spicy oil (red chili oil?) Aside from the tingling sensation left on your tongue, these were kind of bland. 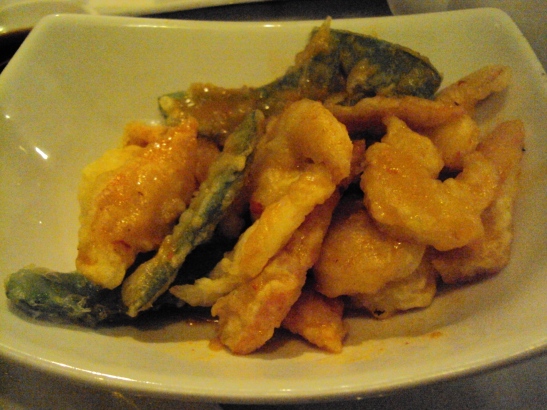 My Rocky Shrimp Tempura with Mango Salsa was sweet and crunchy. The tempura wasn’t as crisp and tender as I had hoped but hey, it was still tempura. The subtle spicy-sweet mixture of the salsa added a nice touch. 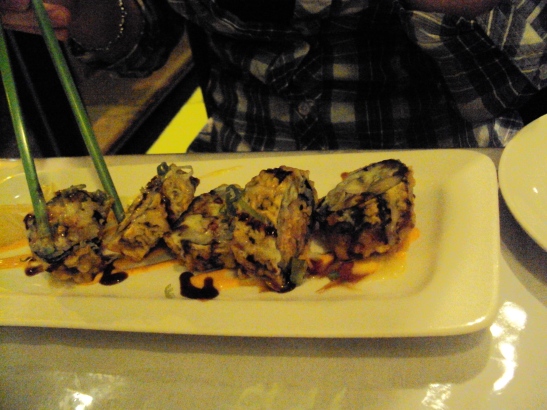 The best appetizer by far was Jeu’s Hokkaido Triple Fish Sushi. Those were crunchy, warm, and a blast of seafoody-sweet-savory flavor. Most specialty rolls at sushi restaurants have similar tastes, but it never gets old! And it was only $5 (part of the new appetizer specials), so it was a pretty good deal. 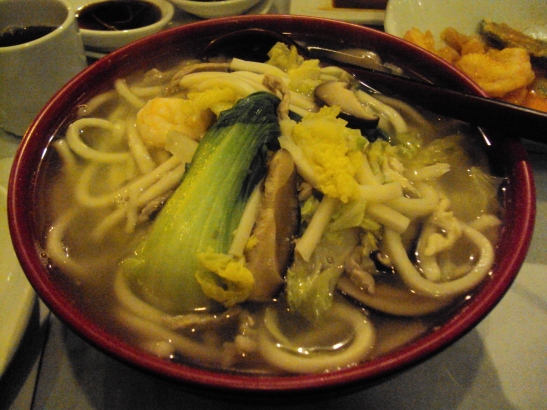 My Grand Shanghai Noodle Soup was alright… It reminded me of some of the noodle soups at Sang Kee, spreading warmth down to your fingertips. However, it’s not like something I couldn’t get for much cheaper in NY. It’s also not something that’s incredibly difficult to make on my own, so I wasn’t impressed. K-Mart’s 8 Treasures Noodles, on the other hand, was a lot more unique.

What I have to say about the restaurant overall: Sakura’s a pretty worthwhile restaurant in Chinatown. It’s a lot more spacious, hygenic, and better-serviced than other places. Foodwise, it’s decent. I like its interesting appetizers, but still uncertain about its entree dishes. I wouldn’t mind revisiting, especially if it’s with Ninja-Kitty, Jeu, and K-Mart again!