Last weekend I decided to take a trip to Reading Terminal to get cupcakes from Flying Monkey Patisserie. A bit hard to locate, I actually had to stop by another vendor to ask for directions. (It was far into the back of the market behind an area under construction.) But despite its remoteness, Flying Monkey attracted quite a crowd.

The selection was much more limited compared to the online menu, and there were surprisingly few cupcakes left by the time I got there. It must be quite a popular little shop. Seeing my disappointment at lack of variety, the lady at the counter told me they had another location on 11th & Locust, so that’s where I headed.

It was a cute little cupcakery, much resembling some of my favorites on the Lower East Side. It was still closed when I got there though, since it opens at noon on Sundays, so I explored the neighborhood for 30 minutes before Erin let me in.

I purchased 6 cupcakes to go for sharing with Ninja-Kitty…but I asked to eat one in the shop, the Green Mint Chocolate Chip. 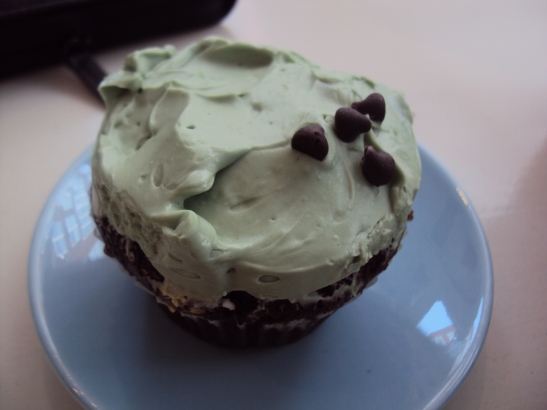 The chocolate cake was average, not particularly fluffy or rich or heavenly. It was a bit dry even, but the frosting had a nice subtle mintiness that resembles mint chocolate chip ice cream. In fact, it reminds me a lot of the filling in Godiva’s Mint Chocolate Chip Ice Cream truffle. However, the frosting’s texture was strange. Partly solidified, it felt like I was eating flavored butter. This was probably due to overnight storage in the refrigerator…

I also tasted the Red Velvet, which was pretty decent until I discovered some unidentifiable black clumps in the cake. I freaked out at first imagining what they were, but found out later that they were just clumps of black cocoa powder. The frosting was like sweet cream, with subtle cream cheese sourness blended with sugar.

Noticing my suspicion of the black clumps, Erin warmly offered me to select another cupcake. (She was such a sweetie!) I had a hard time choosing but finally decided on the funky-looking Pineapple.

I ate this later when I got back to my dorm and thought it was pretty good. I realized that frosting tasted so much better after about 1-2 hrs of walking in the warm weather. The heat probably loosened up the frosting, which has the same effect as leaving butter out to soften. The end result was a lighter, airier frosting similar to Butter Lane‘s fabulous French-style frostings (soo good!)

The pineapple cupcake was basically vanilla cake with pineapple frosting garnished with cute candied pineapples. It was a bit on the crazy side, but I loved it. The frosting had a sweet tropical scent, reminiscent of the filling in Taiwanese pineapple cake, which is always a plus. Furthermore, I thought Flying Monkey’s vanilla cake was fluffier than their chocolate.

The Lavender cupcake was my favorite because of the wonderful soothing frosting that complemented the plain vanilla cake so well. The taste of the frosting on my tongue made me feel as if I were laying in a flowerbed of lavenders. And there was a hint of spice that tasted like chai. It was a lovely change from the rich cupcake flavors I was used to.