During my lunch break I decided to do some food-venturing around UPenn’s area again. As much as I frequent the area, I realized that I only really have been down 2 streets: Chestnut and Walnut. And after a previous dinner date with Soobin at Beijing, I figured that there must be some other eateries on Spruce Street, so that’s where I decided to walk.

And man, did I hit a treasure trove of food trucks. Spruce is near Penn’s Hospital, noted by the tons of people in scrubs and lab coats hurrying down the streets. (I’m going to be one of them someday, yay!) So it comes to no surprise that there are so many vendors that provide convenience for all the busy doctors and nurses.

I checked out each and every one of them, lifting my shades to peer at the menus. A bit creepy and stalkerish, but hey, I totally admit to being a food-stalker and dessert-o-phile. There was quite a variety of trucks, encompassing American, Chinese, Indian, Caribbean, Mediterranean, and Korean styles. I wish there was this kind of diversity among Drexel food trucks, which mostly serve hoagies, cheesesteaks, and Chinese.

It was a hot day so I was very much in the mood for some fruit, especially after passing by several fruit trucks on Spruce. And then when I reached the intersection of 37th Street, I saw this giant fruit stand with a watermelon-patterned umbrella. It resembled a mini-Flushing supermarket. Something within me compelled me to get on line.

When I asked the Asian woman at the counter what exactly is in a small fruit salad, she took out a small plastic container and pointed at all the fruits laid out in the stand, so I said yes. And wow, she wasn’t kidding! For $3, I got a small container bulging with giant slabs of watermelon, cantaloupe, honeydew, pineapple, mango, grapefruit, orange, grapes, a slice of kiwi, and a jumbo strawberry. She literally stuffed the little container and had to hold it together with a rubber band. Plus, she threw in a banana and a napkin.

I absolutely love fruit, my second favorite food group after dessert so I rushed into Penn’s campus, found a nice little bench and feasted. The only difficulty was opening the container to make sure everything didn’t spill out… And indeed, I lost a grape and a slice of mango, which was extremely upsetting. The other issue was that I was in proximity of a trash can and one of the flies attacked me for my yummy fruit, so I panicked and ran.

I also rediscovered Sugar Philly on 38th and Sansom on my trek back to the lab. The pasty chef, Dan, caught me eying the menu and chatted me up about my favorite topic, dessert! I told him that I missed the truck being at Drexel and was very glad to have found it again. When he heard all the Sugar Philly items I’ve tried, he exclaimed, “Wow, that was practically our entire winter menu!” Yep, that’s me alright. A dessert freak.

Dan offered me a macaron cookie for free, so I asked for the green tea. I’m sorry to say that it was neither green tea or a macaron. Macarons are supposed to be crisp, airy, and flavorful, but Dan’s was a bit hard and overly sweet. It reminded me a bit of Lily O’Briens disappointing rosewater-lychee macaron. Furthermore, I couldn’t taste a bit of matcha and the ganache was overpowered by the sweetness of the wafers. 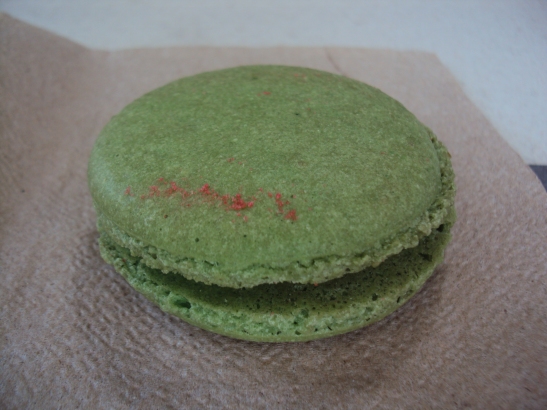 When I told Dan to his face that the macaron was pretty good but a little hard, I was definitely sugarcoating my words. I feel really bad for calling Sugar Philly out on the poor macaron, especially since Dan was so generous. I feel even worse for having lied to his face about my honest opinion. And I feel like a coward for expressing my disapproval so openly online but lacking the courage to say so the first time he asked.

But I did promise to go back, so tomorrow I’m going to share my candid critique and advice with Dan, and of course to try a new dessert. Stay tuned!

One comment on “Fabulous Fresh Fruits & Re-discovery of Sugar Philly”