There are 2 Starbucks on 34th Street a block away from each other, one on Chestnut and one on Walnut, both conveniently located near my lab so I decided to take advantage of this.

In the morning I bought a Raspberry Swirl Pound Cake at the Walnut location. Very beautifully rendered with artistic pink swirls on the loaf, I admit I was enticed by the design. It tasted pretty good too, soft and cakey with cute raspberry overtones. There even seemed to be tiny raspberry bits buried within the pink swirls. My main complaint is the unnecessary white icing that tasted like cream cheese cupcake frosting, the overly sweet kind. I thought it was overkill on a perfectly fine slice of pound cake.

I also got a pack of 2 Black & White Cookies, a NYC Classic as noted on the description. I ate the first one slowly, sampling both sides of the cookie. The black gushy fudgy side totally won over the hardened saccharine white glaze. Sort of ironic, since usually “the dark side” represents evil, but I guess since they have cookies it can’t all be that bad, eh? I popped the second one whole in my mouth and discovered that was the best way to eat it! The chocolate flavor masked the white, but the sugary icing added an extra kick of sweetness. It was still on the sweeter side though… 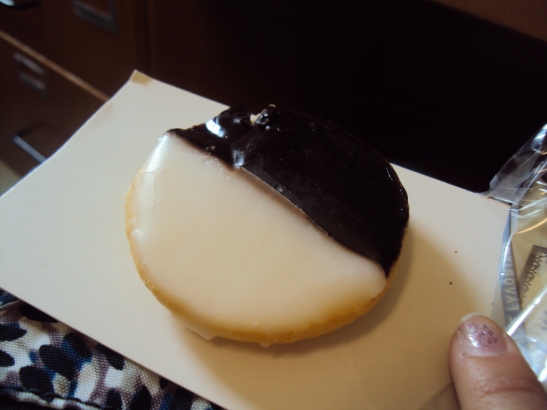 For lunch I went to Chestnut location for an Asiago bagel and a second gift stamp receipt! The bagel was really cheap too, just under $2, and it was pretty good too. I asked them to toast it and add cream cheese, but it turns out they just give you a pack of Philadelphia Cream Cheese to spread on yourself. The bagel tasted sort of like cheddary Goldfish, the snack that smiles back, except warmer and breadier. I liked it because the Asiago cheese flavoring added a rich pungency. I tried spreading a little cream cheese on it and found it did better without. Cheese on cheese is just too cheesey. Plus, it messes up the original Asiago taste.

Later in the evening, I visited the two Starbucks again and got one grande drink at each location for $4 total, using my receipts to their fullest potential. I got the Strawberry Banana Vivanno first so I could compare it to yesterday’s Strawberry Frappe. Honestly, I thought this was way better than the frappe since it was smoother, richer, healthier, and had more fruity flavor. The strawberry-banana blend just beats out plain strawberry. Furthermore, frappes tend to have a few chunks of ice that weren’t blended properly, ruining the texture. But Vivannos have less ice and real bananas, smoothing out the texture.

My second drink of the day was a Light Cinnamon Dolce Frappuccino (since I felt too guilty to down another whole frappe), and it was also pretty good. I feel like in general, the baristas at these locations are much more experienced than the ones on Drexel campus (which are predominantly students). Anyways, this frappe tasted like oatmeal raisin cookie batter with little bursts of spice and little bursts of coffee. The whipped cream makes a huge difference with coffee-based frappes, reining over the coffee taste to make sure it doesn’t get out of control. (I don’t really enjoy the taste of coffee.) However, adding whipped cream to the creme-based frappes often results in excessive creaminess. Good thing this one was coffee-based!