Ahh, Pri and I had been wanting to go to Sugar Cube for like everrr, and it finally came back to 33rd and Arch yesterday and today!! Having recently changed its name to Sugar Philly (since apparently there’s a clothing store named Sugar Cube somewhere), this truck still maintains its cute design of raining sugar cubes and cupcakes from the sky, a dream I share with other dessert-fans!

I decided to try two desserts, since its website didn’t show the next time Sugar Philly would be back.

I knew I definitely wanted the Chocolate Bread Pudding, since I’m a huge fan of chocolate, bread, and pudding! Served warm in a tin mixed with Earl Grey tea creme anglaise (a light pouring custard made from beating egg yolks), the bread pudding appeared quite luscious. However, I was rather disappointed by the lack of chocolate flavor. I also didn’t understand how it was bread pudding, as I did not taste much bread in it. The texture was a bit odd: not entirely smooth like pudding, but not crumby like bread but somewhere in between. I suppose this could just be the conventional texture of bread pudding. I liked the milky aromatic tea flavor produced by the creme anglaise, but it overtook the dessert completely, due to the lack of chocolate intensity.

When I shared my feedback with Benson, the guy who frequently works the truck, he explained that previous customers have complained that the chocolate was too rich. I suppose I could just have a more European taste for chocolate than most people. But still, the bread pudding was a bit on the mushy, not-so-amazing side, especially not for a pricey $5. 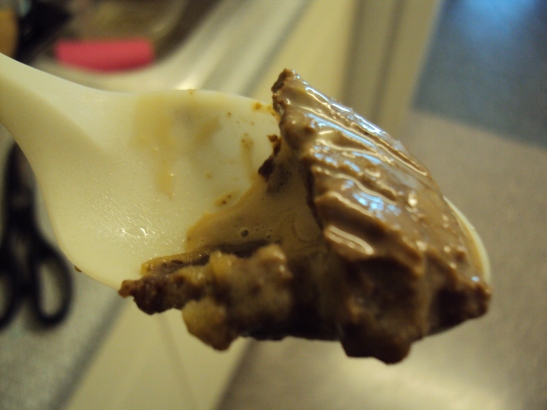 A closer look on the pudding.

I had trouble choosing between the Peanut Panna Cotta and the Vanilla Creme Brulee. Luckily, Benson was helpful in recommending the panna cotta. It was a great suggestion, as I ended up enjoying it a lot. It was definitely a good first panna cotta experience. Covered with a layer of grape sauce, toasted peanuts, and chocolate crumbs, the panna cotta was definitely a flavorful experience. I churned these condiments around like fruit-on-the-bottom yogurt, as Benson advised.

The crumbs blended in very nicely, melting away into the smooth richness of the cream. The only suggestion I have is for the toasted peanuts to be chopped more finely. This would give the dessert more of a peanutty flavor, and allow the cream to maintain its richly smooth consistency. In fact, it might be even better if the peanut was incorporated into the panna cotta rather than just being sprinkled on top. Nonetheless, it was a heavenly and guilty treat seeing how last week was tortuous with tests. Although it was still on the expensive side for dessert, I would get this again (just not frequently because I might die from all the artery-clogging cream). 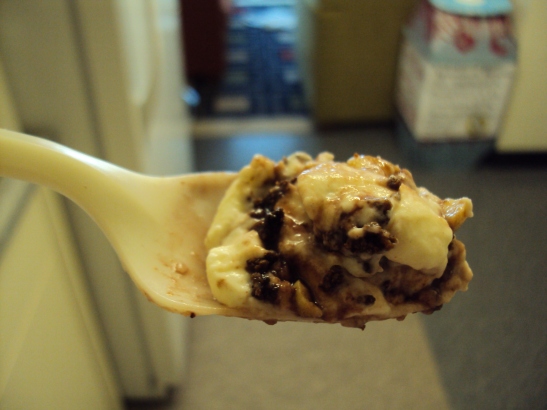 Pri had gotten the Spicy Mexican Layered Chocolate Cake, and thought it was a bit too spicy and on the dry side. (However, I think this says more about the style of Mexican dessert than the adequacy of Sugar Philly’s chef.) My roomie got the Pear Almond Tart and liked it a lot. I think I’ll try that next time, or the Creme Brulee, so stay tuned for more on Philly’s dessert truck!

Grade: B- for Chocolate Bread Pudding, B+/A- for the Peanut Panna Cotta. Overall: B

Conclusion: Pretty interesting desserts. I think they should be $3-$4 each instead of$5, but it definitely has a friendly personal service. And I like the whole cute truck idea, so props for creativity and service! I will definitely be trying more desserts from Sugar Philly dessert truck!

Location: It moves and varies.

Other Opinions: Not Available yet. (How exciting! I’m one of the first reviewers!!)

5 comments on “Dessert Truck in Philly!”