More Japanese Food in the City

I also hit up my two favorite quick-grab Japanese eateries in the city. Situated right next to one another are Chiyoda Sushi and Cafe Zaiya!

I usually go inside Chiyoda first, since its food tends to be more expensive but of higher quality. Chiyoda definitely serves high-grade sushi, onigiri, tempura, and croquettes, my favorite! So when I saw the creamy scallop croquette in display, I knew I had to try it!

Its small size was not worth the $1.75, but the croquette was mighty delicious. Crunchy light coating of panko (Japanese bread crumbs, which is made without crust) fried just to the right amount stuffed with a warm seafoody filling that tasted like clam chowder.

Just because Chiyoda’s onigiri is of higher quality than Zaiya’s does not mean that Zaiya does not have good onigiri. In fact, I love Zaiya’s fresh warm onigiri, because it has a home-cooked comfort food feeling. Plus, it’s cheaper, so I got a salmon onigiri and a spicy tuna onigiri. I was surprised at how delicious the spicy tuna one was. I think it may have just usurped the salmon its position of my favorite.

Another win for Cafe Zaiya is its built-in Japanese bakery! Although I had never really tried the cakes, I know they have yummy green tea pudding and yakimochi (yummy chewy sesame rice cake bread). This time, the green tea bread, pumpkin bread, and chocolate coronet caught my eye.

To be honest the green tea bread disappointed me. It was just a man tou (Chinese steamed bun) with a hint of green tea flavor. The only special thing about it is that there was a layer of thick sweet red bean on the bottom. But what strikes me odd is, why is there red bean stuffing on the bottom? Shouldn’t it be the filling inside the bread? I think I’ll stick with the chlorella from Koryodang. 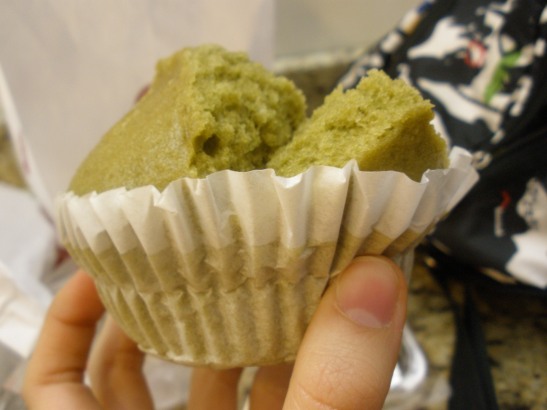 On the other hand, the pumpkin bun, which I had saved for breakfast this morning, surprised me with its deliciousness. There was a generous amount of pumpkin filling, which reminded me of Fay Da’s sweet potato bun, only Fay Da uses only a meager amount of sweet potato filling. Cafe Zaiya puts an appropriate amount of soft, slightly cinnamony pumpkin-pie-like filling. I approve.

Grade: B+ for the croquette and onigiris, B- for the green tea bread, B+/A- for the pumpkin bread, A for black sesame ice cream

Conclusion: Once again, Chiyoda and Zaiya prove to be pretty darn good. If you would ask me to choose between them, I wouldn’t be able to, because they are two different-styled eateries. Chiyoda is more refined and focuses on small dishes, whereas Zaiya has great breads and bentos.

One comment on “More Japanese Food in the City”