Naruto!! (the restaurant, not the show)

I ordered the Original Naruto Ramen since it was my first time at the restaurant. I found it a huge step up from Ajisen Ramen (which I thought was quite horrible because its broth tasted like salty skim milk and the noodles were obviously instant), but no match for the more famous and classy Japanese noodle restaurants (like Menchanko-Tei). The broth was mouth-wateringly savory, but too oily. I prefer a light but flavorful broth or a creamy soup, not an oily soup. (Save that for the cars, please.) 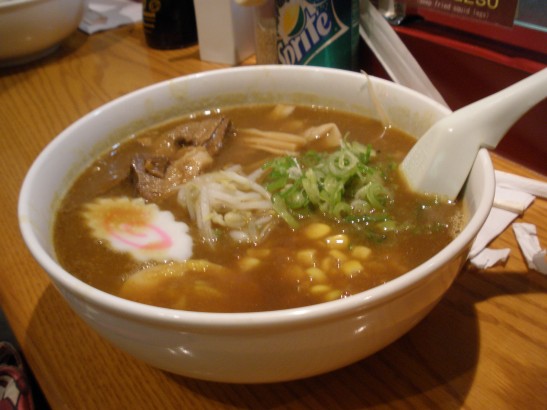 However, the noodles were quite delicious. Chewy, soft, and elastic, just as ramen noodles should be! Everything else was just mediocre. The pieces of meat were soft, but not tender enough. The corn was…well, corn. And the bean sprouts were crunchy, which means they’re fresh and edible.

My favorite part was eating the naruto swirl fishcake, since that’s what Naruto Ramen is all about (aside from the noodles). It was soft, squishy, and full of naruto-goodness. However, I was disappointed when the worker there told me that the narutos are ordered from a Japanese company. I naively expected them to be made by Naruto Ramen itself, or at least be more special than just another pre-ordered packaged food that can be found at the local Japanese supermarket. Since this is the case, then the restaurant should be more generous with the fishcake to make the bowl actually worth the $8.50 (in each bowl of ramen, there’s only one puny piece).

Some of my other friends ordered the Miso Ramen or the Curry Ramen. I had a taste of both broths but don’t quite remember any of it. I think the curry probably tasted better, and was less oily. However, its flavor did not match up to authentic Japanese curry (the mild, savory, slightly spicy curry).

Conclusion: I was unimpressed and expected more, especially since they were selling the naruto in their restaurant name. The broth was too oily and not worth the $8.50. I’d rather spend $1 or $2 on some grade-A ramen. I might come again to try the curry rice platters, although I expect the experience to be similar to Teriyaki Boy’s.

2 comments on “Naruto!! (the restaurant, not the show)”