Chwis and I took this wonderful opportunity to trek down to Metropolitan Avenue and visit our favorite ice cream parlor, Eddie’s Sweet Shop. After all, we were long overdue for an end-of-AP-Tests-hooray! celebration.

I went to Eddie’s only a few times in my childhood, but these occassional happenings imprinted precious pleasures in my memory and stomach. (This also makes me a bit partial to Eddie’s, but its ability to leave such a huge impression on me obviously means it’s amazing!)

So what exactly is amazing about Eddie’s? Well for one, the fresh homemade ice cream and syrups are lovely sinful treats. Another factor that contributes to Eddie’s awesomeness is the quaint, old-fashioned atmosphere. The interior of the parlor is mid-20th century style, which emanates a cozy, antiquated feeling. 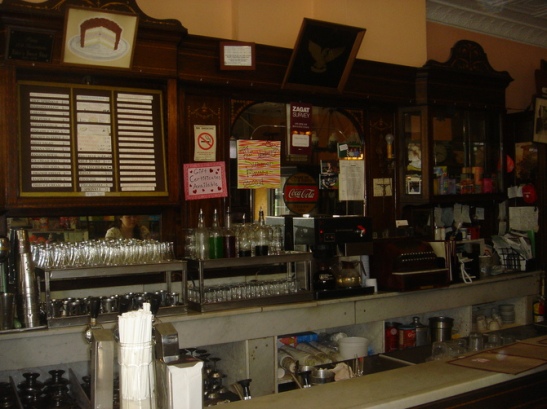 The counter where you order your ice cream. You can sit here to eat your ice cream or get tables in the back. I like sitting here because it feels like your at an ice cream bar. (haha) Also, notice the nice little Zagat rating on the wall =

My earliest memory of Eddie’s was an unforgettable banana split. I’ve also tried its shakes, which are generous and delicious. This time, Chwis and I split a three-scoop ice cream sundae (for $8, no tax)! We chose butter pecan, vanilla fudge, and tutti-frutti (my favorite!) for ice cream, decked with a topping of hot fudge. 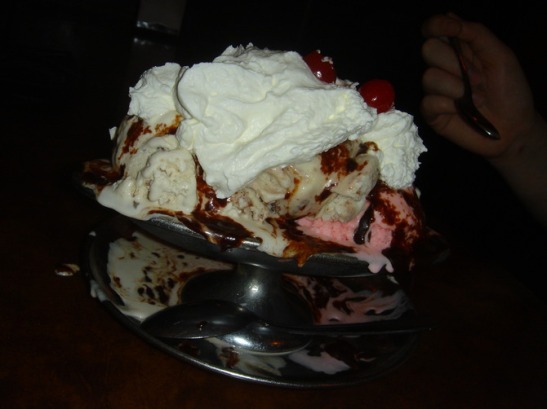 I had almost forgotten how delicious homemade ice cream tasted (especially with all the froyo and gelato in the city)…but Eddie reminded me of the joys of slowly smoothing a spoonful of ice cream in my mouth, chasing after the ice cream truck as a kid, furiously digging into the ice cream dish but making sure to catch all the drips. Yes, all this is the magic of Eddie’s ice cream.

I love hot fudge. I’ve never had a hot fudge sundae, but I remember the craze when I was in elementary school. Now i understand why kids, why most people love hot fudge sundaes. The smooth lukewarm chocolate warmed the cold ice cream, causing it to slightly melt and become creamier. This worked extremely well with the scoop of vanilla fudge.

The only parts of the sundae I didn’t like were the artificial cherries (which Chwis happily devoured since she likes them), and the overwhelming amount of whipped cream. It’s not that I don’t like whipped cream. I like it, but in minimum amounts, since it leaves nothing but  a fatty aftertaste and empty calories. (I mean, what’s the point of gaining extra calories if they don’t taste like anything?!) Also, too much whipped cream masks the awesomeness of the ice cream. But no matter, because Chwis and I carefully scooped out most of te whipped cream, making sure no ice cream or hot fudge were wasted!

After our ice cream feast, Chwis and I stocked up on some rare candy being sold by Eddie’s as well.

Eddie’s candy is cheap and yummy. They’re also generally not available at the local pharmacy. For example, there’s a lot of interesting Willy Wonka candy, gel-like candy in a tube, lollipops, and a few odd things here and there. I bought some Wonka Tinglerz (bits of crunchy chocolate that pop in your mouth) and berry-flavored Nerds Rope. The Tinglerz were really fun, and everyone loves Nerds Rope!

Grade: I want to give this an A+, but I know in actuality it’s around A-…

Conclusion: So the sundaes and atmosphere at Eddie’s is amazing. The waiters/waitresses, and manager (whose name is surprisingly not Eddie) are pretty nice too. The only thing that isn’t so great about Eddie’s Sweet Shop is its sanitation, or rather lack of it…The servers often forget to clean the tables of leftover ice cream unless you tell them about it. And I heard the bathrooms here were hideous…