Yesterday Chwis, Oniichan, Lili, and I went to my favorite Japanese noodle restaurant, Menchanko-Tei for dinner. There are two locations of Menchanko in the city, and we went to the one on 45th St. (though I believe the one on 55th St. is the original and is a bit better).

Oniichan ordered the marinated chicken appetizer, and it was delicious! Oniichan even said, “This is the best chicken, I’ve ever had!” And meat-o-philic Oniichan has eaten plenty of good chicken before. I can see why he loved it so much though, because the meat was very tender and juicy, covered with a slightly crispy layer marinated with a blast of mild vinegary flavor. 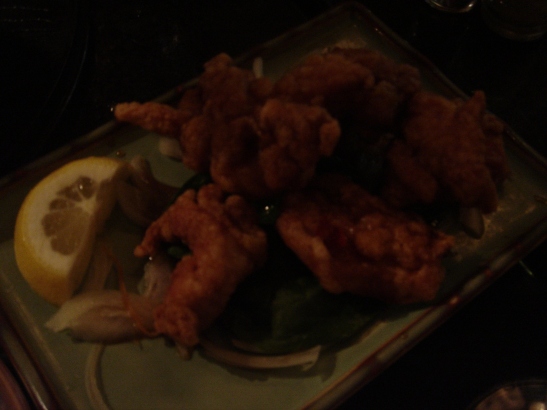 The other dish Oniichan got was the Shoyu-Ramen, which was a lot blander than the Menchanko noodles the rest of us got. In Oniichan’s opinion, the ramen’s soy sauce taste was overwhelming. However, the last time I came with Unnie, she said the Shoyu-Ramen was good. (Perhaps this is because last time we came for lunch.)

Lili and I both got the Original Menchanko Noodles, which was superbly delicious, except they were too salty. Usually, I love the broth of the noodle soup the best, because it has a delicious blend of seafoody noodley oriental taste; but this time the salt was on the saturated side. Lili also said she felt like there was a lot of MSG in the broth…We reasoned that this is probably because we were eating dinner, and by the end of the day the salt probably accumulated at the bottom of the pot. (Last time I came with Unnie right at 11 AM when it opened, and the Menchanko was so fresh and delicious!) Nonetheless, I still love Menchanko Noodles, especially the noodles itself, which were chewy, elastic, and just the right size (not too thick and not too thin!) I also love the chewy block of mochi (rice cake), the tender shrimp ball, and the delicate tofu inside the soup. The shrimp are also tender, and the cabbage pieces crisp, but the pieces of floating meat are flavorless. The Menchanko Noodles are definitely what Menchanko-Tei is famous for, so I strongly recommend it. To me, they’re the best noodle soup in the city! 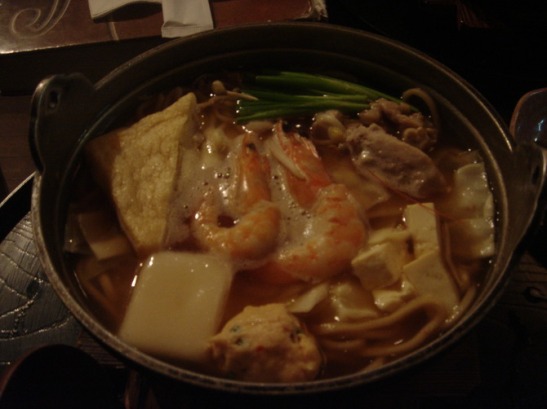 Chwis ordered the Spicy Miso Menchanko Noodles, which still contained the same chewy noodles and delicious goodies, but the broth was spicy and weird-tasting. She seemed to enjoy it enough though, but agreed that the Original Menchanko broth was the best. However, if you’re a fan of spicy things (like Chwis is), I recommend you come for lunch and get the Kimchi Menchanko (which is basically the Original Menchanko + spicy Korean cabbage). 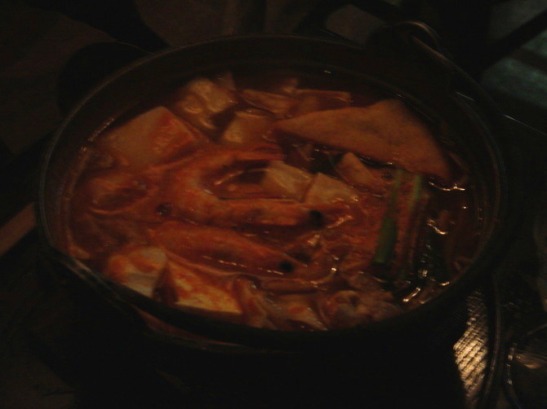 Grade:  B for dinner, A for lunch (especially if you come early!)

Conclusion: Best Japanese noodles! Amazing marinated chicken! Dinner here is not as good as lunch, which is cheaper and better-tasting. Unnie says the Menchanko on 55th St. is better, but hey the Menchanko is still pretty much the same, which is pure awesomeness!

This entry was posted on May 8, 2009 by bubblepeachtea in NY: Manhattan: Midtown and tagged chicken, Japanese, lunch, Menchanko-Tei, noodle soup, noodles, ramen.