On the day before Easter break, Chwis, Lena, Unnie, and I decided to go on a dessert rampage throughout Soho to celebrate!

Not just a center for clothing boutiques, Soho is also home to a handful of exquisite cafes and specialty food stores.

First stop was Hiroko’s Place, a quaint cozy cafe-restaurant specializing in Western-influenced Japanese dishes, which Unnie and I share a love for. 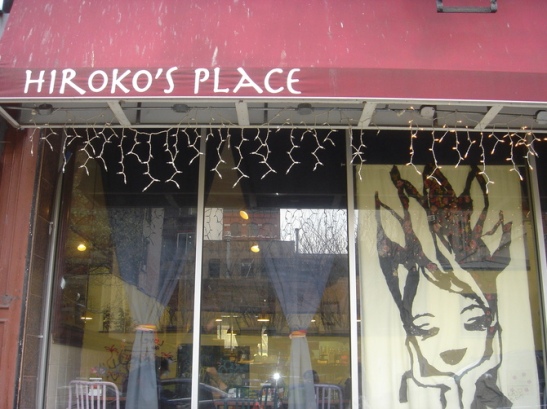 Although our target here were Hiroko’s delicious green tea parfaits, Chwis and Lena refused to eat pure dessert on an empty stomach, so they ordered some “real food.” (Those wimps!) Unnie and I also caved into peer pressure and split a Seafood Doria (a lightly creamy & cheesey casserole).

Lena ordered the same thing, and the three of us agreed that it was the most delicious casserole we had ever eaten. Rich, but not overwhelming, the viscous cheese blended nicely with tender shrimp, chewy calimari, and crunchy veggie bits. Layered over this creamy combination was a thin chewy casserole blanket. The doria was delicious, simple, and nostalgic, definitely befitting for the category comfort food.

Doria with some mixing

Chwis ordered an Omu-Curry (fried rice wrapped in a thin egg, served with a hearty dollop of Japanese curry) under Unnie and my recommendation. This is my absolute favorite dish at Hiroko’s (though now it’s possibly tied with the Seafood Doria). I love it for its eggy rice goodness and its curry’s authentic flavor (as opposed to Teriyaki Boy‘s curry). The only complaint I have about the curry is that it’s a bit thin, and I usually prefer my curry thicker. But its flavor is characteristic of true Japanese curry, the flavor of various vegetables mixed together with only a faint trace of spice. 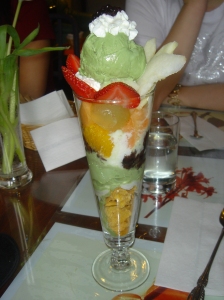 To make up for it, Hiroko’s decorates the top with a motley of fresh fruits, adds sweet red bean in the middle, and lines the bottom with crunchy corn flakes. The genius of this is that by the time you’re halfway through the parfait, the middle scoop of green tea ice cream has begun to melt, seeping into the red bean and corn flakes. You might be thinking: What?! Green tea and corn flakes? How does that go together? But the magical part about the parfait is that it does! Oddly enough, the green tea ice cream goes pretty well with everything in the parfait.

Next on our stop was Kee’s Chocolates, which is right across the street from Hiroko’s. Kee’s Chocolates is one of those small, one-of-a-kind boutiques found only in Soho. It’s run by a Chinese lady named Kee, who gave up a career in business for a career in chocolate (which in my opinion is pretty cool). Everything sold at her shop is hand-made and fresh, but her prices are excessive (at least for a high school student like me).

But for the sake of Dessert Day and Munchi Monster, I decided to splurge a little. Unnie and I each bought a box of 6 for about $15 (see what I mean by excessive prices). The nice part though was that we got to pick whichever chocolates we wanted, and Kee carefully wrapped them in boxes for us.

I still haven’t finished the box yet, but so far I like the green tea truffle the best (bottom left). It was creamy, light, and did not lose its chocolate identity to the sweet green tea scent. (As you can probably tell, I’m a big fan of green tea!) The jasmine truffle (bottom right) was bursting with a decadent dark ganache and a soothing jasmine scent. Aside from those two, everything else was pretty average. Of course, I could tell Kee’s chocolates were hand-made from the best ingredients, but they are still overpriced. I think it might be wiser to buy only one piece, and to choose among her best flavors.

Kee also sells macarons (thin French wafer cookies with filling). I love macarons, but in NYC they tend to be expensive, rare, and inauthentic. Having tried Kee’s macarons before, I highly recommend them. Kee offers a variety of flavors and top-notch quality. However, her filling is overwhipped and airy, a bit too delicate in my opinion. Still, the macarons are amazing and fresh, as you can see people making them through the store’s back door.

Last but not least was Eileen’s Special Cheesecake, a cheesecake specialized shop. This is again one of my favorite places in the city. And it’s not just because my name is also Eileen (though that helps), but because Eileen (the store owner) makes amazing cheesecake! 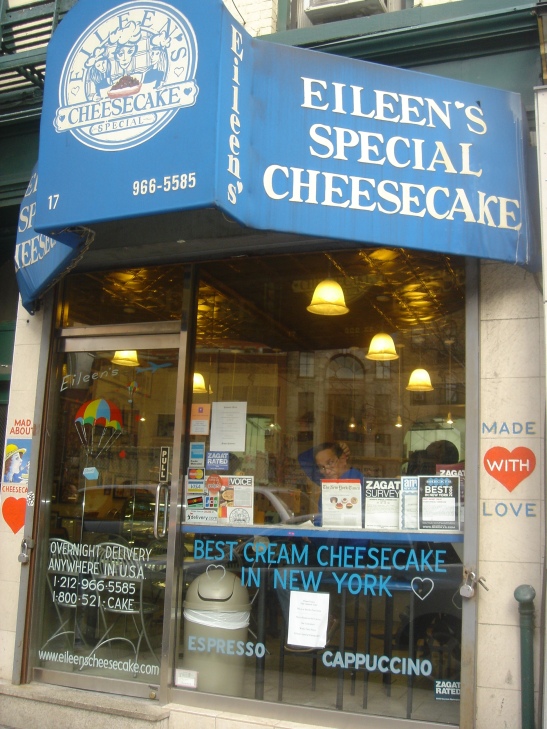 At this point it was getting late, so each of my friends just got something to go. I also bought something for myself, a banana cheesecake. (It was pretty hard choosing, so I just picked the one with the least left). And once again, Eileen proves to be the best cheesecake artisan yet. The banana cheesecake had a firm, well-shaped chocolate crust that crumbles only when you chew it. The chocolate crust complemented the creamy rich banana filling quite well. The cheesecake was heavenly without being heavy, sweet without being saccharine, decorated without being gaudy. 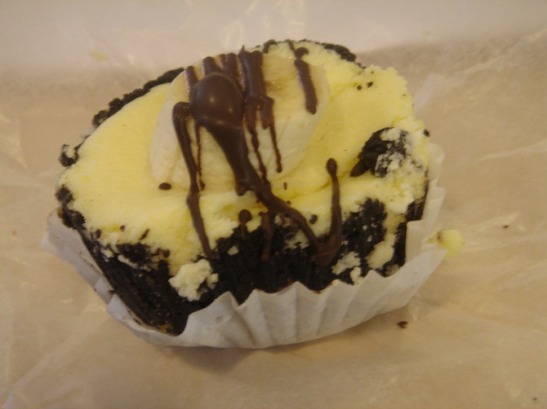 Grade: Hiroko’s Place A+, Kee’s Chocolates A-, Eileen’s Cheesecake A+

Conclusion: Dessert Day was so much fun, and I’d love to do it again with you guys! Soho has the most special food places. Hiroko’s Place gives off a comforting aura with yummy homely food, couches, friendly service, cozy atmosphere;  Omu-curry, Doria, Green Tea Parfait are Hiroko’s best; Kee’s Chocolates are exquisite but expensive, also sells great macarons; Eileen’s Cheesecakes are amazing but can’t be eaten too many at once (your stomach might be incapable of handling it)!