As a second-term senior at Stuyvesant High School, I finally have a lunch period when I can go out for lunch around Chambers Street! WOOT!

So today my Unnie and I rushed over to quaint and cozy Blue Spoon Coffee for lunch.  Although this place is famous for its drip coffee, we were more in the mood for nourishment. So we both ended up getting the half-a-sandwich & soup deal for a decent price of about $7 (which isn’t bad for Tribeca, especially compared to Zucker’s $9 for a cream cheese-lox bagel). 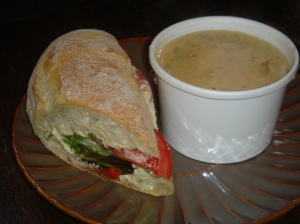 Putting price aside, we were quite satisfied with our meal, especially the delicious Hungarian Mushroom Soup. Rich and creamy, but not too heavy, the density of the soup was just right. It had a slightly fatty aftertaste, but was so mild that any feelings of disgust were washed away by each new spoonful of soup! The flavor was obviously shroom-ish, and complemented the soupy aromas well. The tender slices of mushroom floating around were a bit distracting from the soup itself but they were fun to eat. 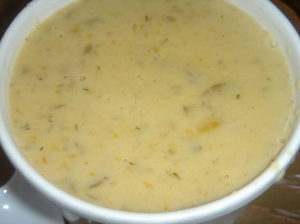 The half-sandwich we each ordered was the Hummus with Roasted Red Peppers & Mixed Greens, which I’ve always wanted to try since I’m obsessed with hummus. My favorite part about this sandwich was its freshness. The peppers and tomatoes were especially crisp, with a just-harvested taste. The tomatoes and cucumbers also felt very clean, and the hummus seemed above-supermarket level. Unnie thought the bread was particularly good too, though I didn’t think it was that special. But I wouldn’t be surprised because I heard Blue Spoon gets its sandwich bread from Balthazar Bakery. And for those of you out there who still believe that food must be excessively greasy and unhealthy to taste good, I refute you with this sandwich as my supporting evidence!

Grade (since I’m a Stuy student and I’m obsessed with grades =P): B+/A-

Conclusion: Amazing soups, fresh sandwiches, paninis are really good (I’ve tried the Turkey Swiss Pesto one before), nice environment, definitely worth the 4-block-dash from school. I would like to come here for breakfast next time for their breakfast pastries, parfaits, and infamous coffee (of course I hate strong taste of coffee so I’ll probably get a super-creamy-&-sweetened cappucino).

This entry was posted on March 26, 2009 by bubblepeachtea in NY: Manhattan: Tribeca and tagged Blue Spoon Coffee, sandwich, soup.